This was a quick and fun interview with Bridget McManus I did in 2011 for the queer women’s site Queeriesmag.com (which sadly is no more)

Will you ask Bridget McManus to the Canadian prom?

Comedian Bridget McManus is smart, funny and a big ‘mo. She was the cover girl of Curve magazine’s America’s Funniest Lesbian issue and a Best Lesbian Vlog Ever recipient. Between performing stand-up and starring in various web shows, she also writes for AfterEllen. If she’s not already on your lesbodar (tip of the hat to Buffy), the question is – why not? Who doesn’t love a quirky, potty-mouthed comedian who embraces outlandish antics and spandex?

Recently McManus was approached by the lesbian online channel Tello Films to create some original content for them. This inspired Bridget to embark on her first scripted comedy series, which she aptly called McManusLand. Fans of Sarah Silverman will want to check out Bridget’s new show. It’s a four-part mocumentary web series that stars Bridget as an oblivious, egocentric actress who is out of work and perhaps also a tiny bit out of her mind. By her side is her trusty pooch Taffy, her pee-protesting cat Shelby and her supportive but weary partner, Karman (played by her real-life wife, Karman Kregloe)

In McManusLand, Bridget relies on absurdity to keep you guessing, giggling and muttering “What the heck” under your breath, so we thought it would be fun to toss a few quick questions Bridget’s way to see if she might keep the good times going with some unexpected answers – and sure enough, she didn’t disappoint.

Suzy Malik: What was the best part of filming McManusLand?
Bridget McManus: Working with my family. They are so funny and patient. My wife makes me laugh in real life, so I love sharing her with the McManusLand audience. Did that sound dirty?

SM: Will Taffy get a spinoff show?
Bridget: Who spilled the beans? Actually, Taffy does have something in the works, but she’s negotiating her contract, so we can’t officially talk about it yet. She has a terrific agent!

SM: What’s with your love of spandex?
Bridget: (Laughs) I know, I have a problem and I need help! I’ve been wearing spandex and leotards since I was a child, and I’m not ready to give them up. Sometimes when my wife is having a hard day I’ll put on a leotard and a sombrero hat and dance around the house for her. Is that weird?

SM: What’s up next for you?
Bridget: I’m working on my third comedy special, which I’m aiming to shoot this summer, and most immediately I’m heading to Mexico to perform for Sweet Travel in Isla Mujeres. I’ll be performing from April 30 to May 7. Wanna come?

SM: Do you have any future plans to bring your standup to Canada?
Bridget: I would love to perform in Canada, but no one has asked me as of yet. It’s like Canada is the senior prom and I’m sitting home braiding my hair. Please, Canada, ask me. I’ll put out! 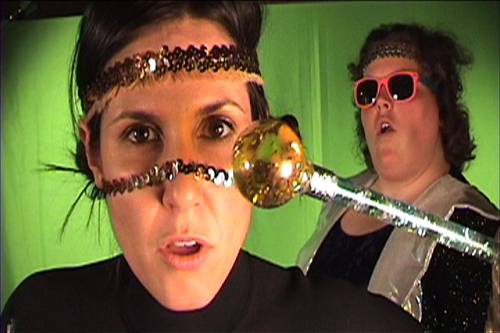 Perhaps before asking Bridget to the Canadian prom you might want to show her that you’re interested in more than just her promise to put out. All four episodes of McManusLand are being offered as part of their premium content ($3.99 for a month’s worth of access) on Tello Films right now. So you’re just a couple of clicks away from watching the whole series and impressing Bridget with your McManusLand knowledge.

While you’re on the Tello site, you’ll also find some free content to enjoy. There are exclusive interviews with Bridget as well as interviews with many other celesbians you know and love. But if you’re looking for something to sweeten the premium membership deal, consider checking out the new web series Cow Girl Up. That’s right: Bridget also slaps on the chaps in a web series about women who have come to the Double D Ranch in hopes of learning to rope ‘em and ride ‘em. Yee haw!