Here’s one from the archives:
This was a review/interview of Sleater-Kinney’s The Woods back in 2005 for the Xtra! paper, it also appeared on xtra.ca. 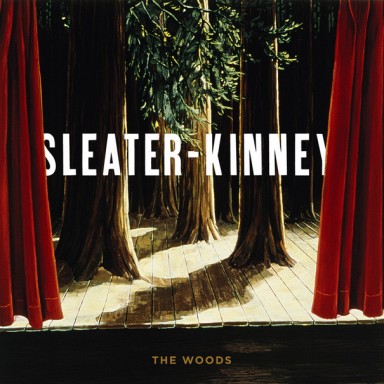 Sleater-Kinney’s new CD The Woods rocks. That’s what the enthusiastic guy at the CD store said when I bought it. He is right. When I put it in my stereo the cat ran under the bed and didn’t come out till the last track ended.

Although The Woods is the result of some notable process changes, this Portland powerhouse trio has definitely proved that they have not gone soft after a decade in the industry.

Corrin Tucker’s vocals are as commanding as ever. Carrie Brownstein’s guitar is sharp but takes space to distort and wander on a riff, while Janet Weiss offers a bit of restraint to set off her explosive drumming. As a result The Woods allows the band to experiment with style and song structure and unexpectedly navigate the testosterone-littered landscape of the guitar solo. Although their riot grrrl roots show in tracks like “The Fox” and “Wilderness,” they also go off in the direction of Jimmy Hendrix-territory. Guitar-store owners be warned, the 11 minute “Let’s Call It Love” could become this generation’s “Stair-way To Heaven.”

For this seventh disc Sleater-Kinney moved from their longtime label Kill Rock Stars to the Sub Pop label (home to Nirvana and Postal Service). The Portland trio also chose to record in New York with a new producer Dave Fridmann (Flaming Lips). “We knew that making this record in a completely different setting would be a challenge,” says Tucker. “But we knew this material was special and worthy of a little suffering.” So how did they keep up excitement levels during the long recording process? “Chocolate, Freaks And Geeks on DVD and 10 hours of music a day.”

I expect a few dedicated Sleater-Kinney fans to sour on some of the solos but I also expect this rock ‘n’ roll accent will invite in new fans especially when the Zeppelin references get out. When asked about this shift from their established “call and answer” style of guitar, Tucker says, “It’s great because we all have our moments on this record, where we each get to step out into the spotlight and let it rip. Very freeing.” The happy medium is provided by the crunchy, poppy sound of “What’s Mine Is Yours,” which starts off in trademark Sleater-Kinney style, wanders off on a guitar rampage but just when the track threatens to lose you there, it returns to its catchy White Stripes-esque beat.

Lyrically The Woods is relevant, as one has come to expect of the band. The words touch on suicide in “Jumpers,” expectations placed on women in “Modern Girl” (“My baby loves me/ I’m so hungry/ Hunger makes me / A modern girl”) and they take a few stabs at current artists for their lack of innovation in “Entertain” (“You come around sounding 1972/ You did nothing new with 1972″). To me “Entertain” sums up the strengths of this disc, the fact that Sleater-Kinney took risks, played with convention and offered surprises – like it or leave it, they did something new with 1972.