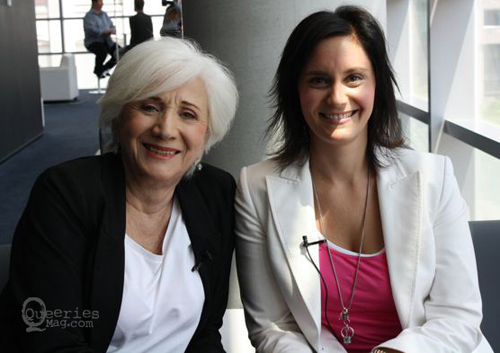 Olympia Dukakis and I go way back.

While running the queer women’s site queeriesmag.com I was gifted the opportunity to set up an interview with Academy Award winning actor Olympia Dukakis. It was kind of a big deal. I popped on my producer hat, lined up Renée Olbert (Seeking Simone) to do the interview and Regan Latimer (B.J. Fletcher: Private Eye) to shoot it.

With the likes of E! and Entertainment Tonight Canada waiting for their own respective 7 minutes with the star, we were definitely the little fish in that pond. Yet despite Dukakis arriving late and her PR people telling us that we wouldn’t even get the 7 minutes initially promised, Olympia was pleased to see our all female crew, and was delighted by Renee’s informed and enthusiastic questions, that she was extra gracious and sat chatting with us much longer than she should have.

Even after the interview Olympia had quite a few questions about who we were and what the site was about, then she turned to me, pointed and said, “you look familiar, haven’t we worked together before?” Which does make me wonder just how many butch lesbians has Dukakis worked with before that she can start mixing us up?