Here’s another one from the archives:
This was a 2008 Xtra! cover story / interview with the ever talented Brenley MacEachern and Lisa MacIsaac of Madison Violet.

Face to Face with Madison Violet. 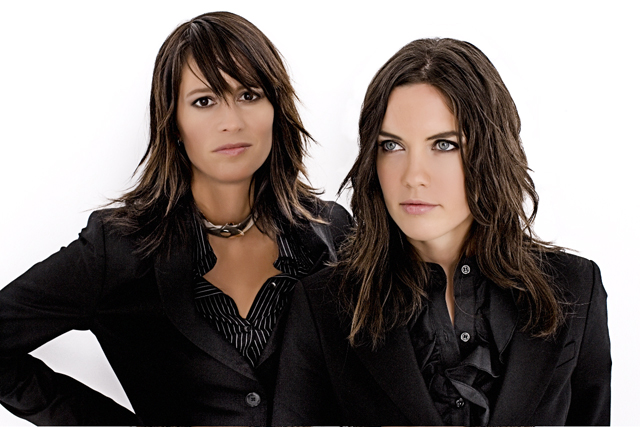 Madison Violet’s forthcoming album No Fool For Trying, is the love child of Lucinda Williams and Gillian Welch if they had Steve Earle as their sperm donor. Want to know more? Of course you do!

After talking openly about their sexuality in an Australian publication Brenley MacEachern and Lisa MacIsaac of Madison Violet (formerly known as Madviolet) then joked about being ready for their Xtra cover. The truth is they couldn’t be more cover ready. They’re interesting, articulate, super-talented musicians who make captivating yet catchy alt-country tunes — oh, and yup, they’re gay.

When asked why their queerness wasn’t mentioned in previous interviews MacEachern says that, “a publication finally asked us about the nature of our relationship and we answered truthfully.” MacIsaac, however, notes that it wasn’t that straightforward. “We’ve had managers, publicists and associates strongly recommend not speaking out about our personal lives.”

Neither want their personal lives to be the focus of interviews but MacEachern says, “Not being candid about who we are can easily be misconstrued as being afraid or, even worse, ashamed and that’s not something either of us can live with. I can’t tell you how many times my father sat me down at the kitchen table when I was a kid and told me to never tell a lie.” It’s that kind of kitchen-table-inspired honesty that makes Madison Violet’s music so open and inviting.

Toronto’s heartfelt folk-country duo have toured internationally and received nominations for East Coast Music Awards. They’ve shared stages with the likes of Ron Sexsmith and The Indigo Girls, but if you haven’t heard of them yet it’s likely because they’ve been winning over fans the good old-fashioned way, one gig at a time.

MacEachern is at home centrestage, banjo or guitar in hand. She has the kind of confidence that quickly puts the audience at ease. With an appealing raspiness to her voice she sings with a welcoming warmth.

MacIsaac isn’t shy about wowing you with her fiddle skills (as you’d expect from the sister of fiddle dynamo Ashley MacIsaac). But she can start off unassuming on the mic, delivering in a sweet, smooth, airy voice. The vulnerability in her vocals are both refreshing and compelling. When the pair bring their voices together in harmony it’s a perfect fit.

Not only do they complement each other onstage, it’s uncanny how much they have in common offstage. They’re both Libras. They’re both small-town girls (MacEachern grew up in Kincardine, Ontario and MacIsaac in Creignish, Nova Scotia). They both share deep East Coast roots: Their families grew up in the same town, absurdly close in proximity. Heck, their fathers knew each other as teens decades before these women were even born.

So if the universe wasn’t going to hurry up and introduce these two so they could start their fated musical careers together somebody else surely would have. Luckily the universe was up to the task and in a city of millions, both MacEachern and MacIsaac found themselves in the right place at the right time — Toronto’s Green Room bar in 2000.

By 2001 MacIsaac was playing in MacEachern’s trip-hop band Zoebliss where the pair nurtured their musical chemistry and discovered they both secretly longed to explore their folk and country roots. Soon Madviolet was born.

When asked about the recent name change from Madviolet to Madison Violet, MacIsaac cracks that “mad” was “feeling a bit taupe to us whereas Madison feels a bit more Kelly green.”

“It was a long time coming,” she continues, “but not an easy move to make by any means. For the past eight years we were continuously being mistaken as a punk band, a psychedelic rock band from the ’80s or a comedic duo — none of which is a fitting description of what our music is about. Extending it rather than changing it altogether was seemingly the most sensible and less confusing move to make.”

Their first disc as a duo, Worry the Jury, came out in 2004 and was a little pop-riffic gem that easily looped on your player and in your head. It featured upbeat drum programming and atmospheric accents served on an underbelly of crunchy rock guitar. The lush arrangements were super radio-friendly, but the standout tracks were the more bare-boned acoustic songs like “Left Foot” and “Save a Song.”

Their follow-up album, Caravan in 2006, was a country-inspired toe-tapping gift to the ears, expanding on the strengths of Worry. Caravan delivered 10 wonderfully stripped-down, acoustically driven tracks. The arrangements were distilled to the essentials, pushing their graceful harmonies to the surface. They tackled sore hearts and guys who couldn’t get it up with compassion and wit.

As Madison Violet they’re currently recording a new disc that promises to continue along the same lines — letting their vocals really shine. MacIsaac’s description has me giddy with the possibilities. “Think rootsy-Americana loaded with harmonies. Lots of stringed instruments: acoustic and tenor guitars, fiddle, banjo, upright bass and mandolin. Basically it will be more stripped down than Caravan… and when there are drums, they’ll be delicate and sparse. The album will feature our voices and the songwriting. Everything else is just gravy.”

“We’re both musical gypsies at heart,” says MacIsaac. When it was time to collect what they call “half-written songs and little ditties” and transform them into a cohesive album MacEachern and MacIsaac took a trip to somewhere inspiring.

They were invited to the Caribbean spice island Grenada to sing the Grenadian national anthem for the prime minister. They turned that trip into three and half weeks of writing and performing the new material for the locals. “There’s something soothing and tranquil about being near water,” says MacEachern. “Maybe it’s a primal connection because we both grew up in lakeside/seaside towns. Something about staring out at [the water] stops that second mind from racing, which is responsible for writer’s block. We spent a large chunk of that time on a 108-year-old lighthouse vessel called Vastra Banken from Stockholm, which is anchored at Le Phare Bleu Marina.”

And what did the lighthouse reveal? “The record has a lot of relationship-based songs,” says MacEachern. “Heartache and hopeless love find themselves creeping in and out of our lyrics. There will certainly be a more melancholic side to this album. About a month after Caravan was released my brother was murdered here in Toronto and Lisa also lost a great friend and musical cohort, Denny Doherty of the Mamas and Papas. Consequently we’ve penned some our most cathartic songs we’ve ever written. It was a painful process and the songs are sad, but I like to think they’ll have a salubrious effect on people. The last thing we want to do is put out a dismal gloomy record.”

In order to fully capture their uplifting vocal pairing Madison Violet also changed the way they recorded. Now both record simultaneously, face-to-face in the studio. “We’re going to try and get everything live off the floor,” says MacEachern. “So not only will we both be singing together, the band will all be there in the room as well. It enables us to feed off one another’s emotions and intensity.”

These travellers have decided to keep that intensity close to home this time around. They won’t be recording in England with John Reynolds again, as they did with their previous two albums. “There are so many extraordinary musicians in the Toronto scene who we respect and would love to work with,” says MacIsaac. Local producer Les Cooper (Jill Barber) will help finesse Madison Violet’s studio sound. It’s a good match and the results will no doubt be irresistible.

One thought on “Madison Violet Interview”