This was a very popular early interview with Jessica Clark I did for the queer women’s site Queeriesmag.com (which sadly is no more) in 2011.

Jessica Clark talks about her role as Lexus in the new short film Sara.

Jessica Clark has stepped out of the photograph to show the world that she is a charming and perceptive TV/web personality. Now she is eyeing the big screen, and it’s no surprise that the big screen is eyeing her back.

Clark won a British beauty contest at age 16. Since then her modelling career has found her doing runway all over Europe, starring in an Usher video and posing for some sexy print campaigns. But it was her AfterEllen vlog, Lesbian Love, that cemented her celesbian status.

Lesbian Love featured Jessica and her partner, fitness trainer Lacey Stone, talking candidly about their relationship and their thoughts on love and dating in general. It is this natural ability for honesty and insight that put Jessica on filmmaker Stan’s radar and helped secure her role as Lexus in the new short film Sara.

Enthused about her current film project, Jessica took the time to answer a few questions about her acting debut.

Suzy Malik: I read in an online interview (Autostraddle) that you really fought for the role of Lexus. Why do you think you were the right actress for the role?

Jessica Clark: I think that the amazing thing about telling stories through film is the way it can challenge our preconceptions and prejudices.

I didn’t think that I was the only “right” actress to play Lexus, but I did and do think that I had something unique to bring to the role and a desire and dedication to portray her experience as honestly and compassionately as possible.

SM: What was the biggest challenge for you in the portrayal of Lexus?

Jessica: She is a very different person to me in many, many ways: her background, her life experience and how sheltered she had been prior to her meeting Sara, so that was a challenge.

I have been a performer (model/host) throughout my adolescence and young adulthood and have therefore been extremely conscious of my physicality most of my life. Lexus is a grad student and has existed in a very intellectual, cerebral world, and her physicality is almost secondary to the way she relates to the world and thinks of herself. There was a real process of discovery for me in preproduction to explore what that would feel like and how that would be communicated on camera.

SM: Your co-star, Julissa Bermudez, was amazing as Sara. What was she like to work with?

Jessica: Julissa has a wonderful, very organic and natural ability to absorb and portray the very complex experiences and emotions of the characters she inhabits. She was inspiring and encouraging to work with and to watch work.

She also has this very relaxed, life-affirming quality, which meant that she could be 100 percent committed to Sara and our work together during filming and then be this hilarious, gregarious entertainer when the camera wasn’t rolling. She really embodied both elements, and that’s so important on a set where the filmic subject matter got quite intense.

SM: How has your modelling experience helped your acting? Are there any ways it hinders it?

Jessica: It has helped me in terms of my understanding of the camera, angles, lighting, etc. I also have very little self-consciousness. I don’t care about looking or feeling silly; whatever the scene or character needs, it needs, and that’s okay.

Hangovers from modelling include being overly conscious of the camera and “working toward it” rather than automatically trusting the director and cinematographer to have that covered. I have had to work to overcome that.

I am very grateful and appreciative that Sara was such a safe and supportive set because it really was a steep learning curve for me as a first-time actor. 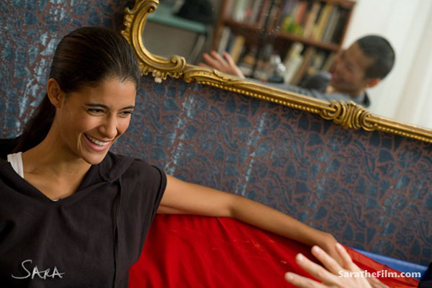 SM: Why was Sara an important film for you to be a part of?

Jessica: I feel very strongly that this film contains concepts and experiences that aren’t often explored in female-centric films. I also appreciate that Stan is dedicated to portraying people of colour in film, as that is all too rare as well. I felt and feel strongly that Sara has a unique voice and both a social and an artistic vision that contributes to the film overall.

SM: Why should everybody go and download this film right now?

Jessica: It offers a different, unique and thought-provoking life experience that raises a question in the viewer’s mind: what would you do? It affects us beyond the immediate viewing experience and is worth watching more than once.

In the Sara digital download package not only do you get the film in full HD, you also get an alternate cut that is much longer (28 minutes), which really opens up the story and has a very different pace and feel. The whole package is only $4 and you directly support independent filmmaking!

SM: You have modelling, TV/web host, life-coaching and now acting on your CV. What else would you like to add to that list?

Jessica: Acting is my singular professional focus as of now and into the future.

I am lucky enough to still model on occasion, and I know that I am extremely fortunate to have a first career that so enables me to evolve into my new career and passion. I feel that life is very much a journey. Every thing, every opportunity is a world to explore that brings us closer to what it is we are meant to be doing. Coaching is very much about exploring character/wants/needs/desire/truly listening — truly exploring, and all these things contribute immensely to my work as an actor now.

Similarly, with hosting there is a technical skill and an unselfconsciousness that serves me well now. But acting is really where my passion lies and where I see my present and my future.

SM: Are there any plans for you and your lovely wife, Lacey Stone, to collaborate again on future projects?

Jessica: As of this moment we are both focusing extremely hard on our individual careers. Hers is going incredibly well, and I am so happy and proud for her. I am so lucky because we are both so supportive of each other and our professional journeys.

We love working together, and there are many overlapping aspects to our passions and interests, and we definitely haven’t ruled out working together in the future. However, we also really get a kick out of each other’s successes and enjoy our individuality. It keeps it fresh and interesting for us both!

SM: What are you working on next?

Jessica: I am in preproduction for my lead role as Paris in Nicole Conn’s (Elena Undone) next feature, A Perfect Ending, due to start filming in March. I just love and adore the script and can’t wait to start working with Nicole and my co-star Barbara Niven.