Here’s one from the archives:
This was an review/interview with Esthero when she released her 2006 disc Wikked Lil’ Grrrls. This interview appeared in the Xtra! paper back then, it also appeared on xtra.ca. 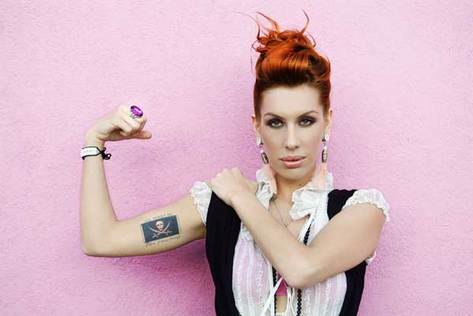 Esthero‘s latest disc Wikked Lil’ Grrrls was a long time coming. It had been seven years since Esthero released her 1998 breakthrough debut Breath From Another. In the late ’90s Esthero was Canada’s musical darlin’. Who doesn’t remember the catchy electronica/trip-hop beats of Breath? Esthero was a homegrown, fresh-faced 20-year-old with a sultry voice and ample radio play — and people took notice. Songs like “That Girl” were carved into the collective pop music consciousness.

Where Breath drew comparisons to contemporaries Portis-head or Björk, Wikked Lil’ Grrrls seems to call up sounds from the ’20s and ’60s ghosted over modern-day pop, jazz and R&B. It’s like she reemerged embodying the black-sheep spirit of an Andrews sister. “I’ve always dug that swing jazz [1920s] sound,” says Esthero. “It’s brazen and fun.” Which to me describes Wikked Lil’ Grrrls perfectly. Those flapper girl accents make this album. I mean, what other mainstream artist is rocking the clarinet these days?

Wikked is also full of some touches from major talents in the industry (André 3000, Sean Lennon) and Esthero has recently relocated to LA. But this Toronto native seems to remain grounded, revealing her soft spot for the scene at home. “I adore Toronto musicians. They are so creative, so soulful. And because of this wonderfully diverse city we live in they are knowledgeable of all different styles of music.”

Although long gaps between albums can make fans and critics antsy and Wikked was released to mixed reviews, I must confess I spent a long time spinning the disc and singing along quite enjoying myself. I find the mash of genres and eras interesting and “We R In Need Of A Musical Revolution” and “Every Day Is A Holiday (With You)” just need to be on your latest mix CD.

When asked why the long wait this fiery songstress offers a relaxed insight: “It just kind of worked out that way. Most people who know me will tell you that I like to take my sweet time with everything. I like to live and garner inspiration. I don’t like to rush.”

During her album hiatus the music didn’t stop, Esthero contributed to numerous TV and movie soundtracks (The L-word, Slam, Go) and collaborated with artists like the Blue Man Group and Nelly Furtado. But most of the boys out there will recall the house remixes of “OG Bitch” that Esthero seemed to pump specifically into the gay clubs with love.

“I wanted to give that track to my gay boys and my queens. I feel that the gay community understands irony and kitsch in a way that most people don’t,” says Esthero, “and they celebrate fabulousness. As opposed to it being a diss track I wanted the queens on the dance-floor saying, ‘I’m the original bitch, honey!’” Wikked doesn’t disappoint those looking for another lyrical sharp edge to throw across a dancefloor as Esthero taunts with lines like, “She won’t fuck you like I did/ She’s not into that wild shit,” on the booty-call track “If Tha Mood.”

When it comes to her involvement in the upcoming Goddess Festival Esthero aka Jen-Bea relaxes her tough girl stance and is all warmth. “Goddesses are drawn to each other. I am really excited to be a part of the festivities and to use my mojo for a little bit of good at the same time.” This year’s Goddess Festival boasts a solid lineup of some of Canada’s finest female singer songwriters: Melissa McClelland, Emm Gryner and queer faves Magneta Lane. Yet Esthero backed by a big band belting out these playful tunes will be the act to see.