Here’s one from the archives:
This was a piece I did after interviewing Kinnie Starr back in 2006 for the Xtra! paper, it also appeared on xtra.ca. It was my first feature cover story. 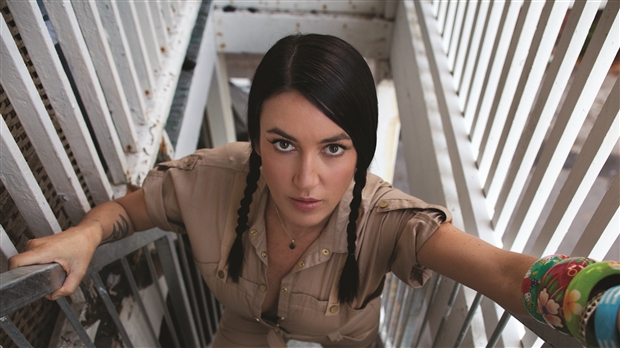 If your first introduction to Kinnie Starr‘s music was hearing it accompanying Jenny and Marina’s torrid affair on the lesbian drama The L-Word, you’ve got some catching up to do. The openly bi artist is a multi-talented, multilingual MC that has been spitting sharp words on the Canadian indie music scene for quite a while.

Over the last decade Starr has moved away from the sexy PJ Harvey-esqe rock of her 1996 debut album Tidy that first put her music on people’s radars. With each subsequent album, Starr has refined a smoother hip-hop sound. “Hip hop is pretty well all I listen to,” she says. “So it inflects into everything.”

Anything is the title of her new album and the title of the lead single; it’s also the word she uses to describe what her music is about. Starr has always mixed genres skillfully and on this fourth disc she continues this tradition, weaving head-bopping hip hop with grungy rock guitar riffs and accenting it with a new found pop sensibility. The result is a fun CD that makes a great companion to any sunny day’s drive on an open road.

Anything was recorded and produced at Vancouver’s Ogre Studios with drummer John Raham, so it’s no surprise it features some memorable and wonderfully executed beats. The first half of Anything begs to be blasted loudly from your speakers, especially the bluesy but feisty opening track “Step Back.” Singing along to the chorus, “Step back got more space for you/ Gonna get free from that shit you do,” has a wickedly satisfying feeling.

“‘Step Back’ is the only cowrite on the album, and I thought it was a really dope take on hip hop and blues,” says Starr. “It features a dear friend of mine named Jason Burnstick [on guitar]. The polyrhythmic feel of the groove was put down by John Raham and Chris Carlson, my ex-bassist and current bassist for Tegan And Sara.”

The second and title track “Anything” keeps the CD buoyant, as does the dare-to-be-different anthem “Rock The Boat.” The album mellows a bit in the middle, with the soft and sweet “Please Hold My Hand” and gets a little darker toward the end with the haunting, almost pleading “Walking Away.” There is one odd detour with “Sex In the Prairies,” but overall Anything maintains it’s flow throughout.

Highlights include the synth accented “La Le La La” (backed vocally by friend Tegan Quinn of Tegan And Sara). “You know I love you/ It wasn’t that hard to forgive you/ You stood by me strong for a while/ Yeah I love you/ It was too hard to forget you/ You stood by me tall for a while.” Sounding like bubble gum pop with a clap-along chorus “La Le La La” is a cheeky way to deliver a mature take on forgiveness and understanding – which seems to be the best way to describe Anything’s state of mind.

While Anything is upbeat, it’s in no way the light celebration of love that was Starr’s last CD Sun Again from 2003. Now, a world-weariness mixes with Starr’s optimism. Anything exudes a gentle feeling of acceptance and it’s through this lens that Starr assesses the people and situations around her. As she sings on “Up In Smoke,” detailing the crash-up of her cousin’s record label deal: “Nothing ever happens the way it’s supposed to/ I guess I will just do what I do, what I do.”

Starr, who was born in Calgary and now lives in Vancouver, credits her family as the inspiration behind much of the disc. She takes time to explain the catalyst to certain songs. “‘Wind In Your Sail’ is about how we should treat each other better and is based on a photo of my mom and dad when they were young, around my age.” Though a slowed-down ballad, the song still shows how her singing is infused by hip hop — the timing, the well-placed repetition and pauses between words. “I can easily criticize all that you do/ But I can also see you’ve got the world upon you/ So I will try to be a much better friend to you/ Yes, I will try to see the beauty in the things you do/ See the beauty that is you.”

“‘Black Brown Eyes’ is based on a visit my dad and I took to visit my great auntie – she is my namesake, Alida – when she wouldn’t talk about her Mohawk blood.” Starr’s take on her aunt’s silence results in an enlightening journey for the listener. She starts off questioning: “Black brown eyes where’d you learn how to lie?” Then whispers: “All your truths got traded in/ Your black brown eyes and red man’s skin/ Stories folded carefully/ You fold away your history.” The song resolves with, “I know why you lie.”

Starr is always writing; inspiration is everywhere. “Things people say, signs in the street, little details… I hear rhymes, unfortunately, all day. It interferes with my ability to remember other details and I can come across as a space cadet.” Fortunately when performing, Starr’s energy is focused and ferocious.

Starr was “discovered” back in 1993 when friends nudged her onto an open mic stage in New York City. The performance caught media attention, with words like “edgy” and “enchanting” appearing in the New Yorker. But even without her friends’ prompting, I firmly believe the stage would have moved into the crowd, slid under Starr’s feet and raised her up on its own. Kinnie is a born performer. The ease with which she somersaults words off her tongue is intoxicating. You can check for yourself at the North By Northeast fest when she joins the Sirius radio night at the Horseshoe on Sat, Jun 10. She’s back in town with Buck 65 on Fri, Jun 30 at the Opera House for the Toronto Downtown Jazz Festival.

Regardless of the size of the crowd Starr manages to make each performance intimate. She is not afraid to jump off the stage and surround herself with the dancing audience. She’s been known to invite volunteers onto the stage to freestyle with her. Starr is one of the few musicians I’ve seen that truly feels the crowd and strives to be engaging. “I do feel the crowd,” she says emphatically. “It’s my objective to connect with them and I have always had that as my primary goal.”

Starr fans will notice her multilingual – French and Spanish – raps and sobering spoken-word tracks are absent from Anything. What remains is her relaxed style and her well-timed delivery. With it’s accessible sound, Anything promises a wider audience for Starr, yet she continues to offer lyrics of substance, ensuring the respect of old fans while making new ones.

So what’s next? “I want to write kids books, movies, screenplays and TV that features women and Natives in all their ranges rather than oversimplified. It’s already being done but in my opinion there are still not enough interesting roles for Natives and women in the world of TV and film. I have many talented friends who get offered the role of ‘Girlfriend’ or ‘Indian’ and that’s just not appropriate anymore. It’s 2006.”

Followers of Starr’s music will be happy to know, despite a long list of other creative endeavors she hopes to pursue, Starr already has another CD in the works. “The [songs] are quite sparse, sort of Joni Mitchell-ish. But they’re not really folk songs. They’re tipped toward jazz and old-school Motown ballads.”